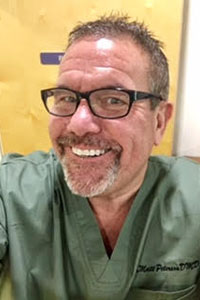 As a Sarasota native, Dr. Peterson attended Phillippi Shores Elementary, Brookside Junior High and Riverview High School. After graduating high school, he moved to Gainesville and attended the University Of Florida where he became a lifelong Gator fan. He graduated from the University Of Florida with an Associate of Arts Degree and a Bachelors of Science in Chemistry. Dr. Peterson began his dental studies at the University Of Florida, College of Dentistry; however, his studies were interrupted by an opportunity to work as a chemist for an Environmental Science Company in Gainesville. After two years, he resumed his dental studies in St. Louis, Missouri. Dr. Peterson graduated Cum Laude from Washington University School of Dental Medicine with his Doctor of Dental Medicine Degree in 1990. He returned to Sarasota with his DMD degree and a 7 month old daughter, Danielle. He joined a group practice and began his career in dentistry. In 1992, Dr. Peterson opened his solo private practice in General and Cosmetic Dentistry. Twenty-five years later, he continues to be on the cutting edge of the dental professional by offering the latest dental technology available, providing the most desired and successful dental services. Aside from dentistry, Dr. Peterson enjoys traveling, boating and music. He has played drums professionally around Sarasota off and on for years.